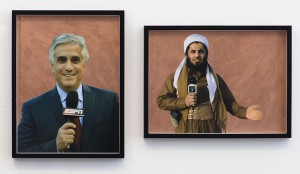 I have this image. Well it is part of one of my current projects and as you can see it consists of two parts. I called my project Islamist Role Models, but maybe I should change that to just Role Models.

While watching a whole bunch of propaganda videos by islamist groups, it struck me that even though they are fighting the West and threaten our lifestyle, these videos are full of gestures and poses all too well known from our own media environment. At first I was astonished by this finding, but the more I think about it, the more natural it seems. Of course these people grew up with a similar media imprint to ours – watching Bruce Lee movies, Arnold Schwarzenegger or Sylvester Stallone. Hollywood and the media played an important role in their upbringing, even though they might have grown up in a different culture, with a different set of moral rules and guidelines. And in fact, many of the people involved in the production of these videos did in fact grow up in the West.

It is just somewhat strange, when you encounter statements by these groups that truly hate the West and everything that originates there and you see them posing in a Hollywood style. Or you see them killing accused “polytheists” and on the other hand practicing martial arts – I am not a Muslim cleric, but karate is most certainly not halal. Channeling energy and chi points and shit, well there is certainly no mention of that in the Quran.

Some of the poses just look ridiculous when performed by islamist fighters. Like jumping through burning hoops, parkour jumps or creating human pyramids with someone waving a flag on top. Strange ideas of masculine gestures. Or these weird huddles, where a huge group of men come together in circle to swear loyalty to a common cause. Something more often seen in sports, with a slight touch of homo-eroticism, but which seems to be part of the typical gestures of the US military as well.

Other scenes are almost impossible to distinguish from those in the media. For instance fighters training swat team like operations. Or snipers hiding in the bushes, apparently waiting for the kill. But this I find slightly more complex. Since Hollywood or TV studios create an appearance of how they think a swat team operation has to look, or what a sniper does while waiting and that then is reproduced by actual swat teams or snipers – at least this is what I believe. The whole thing is a circle of trying to act in a way that looks right, repeated by everyone involved.

So back to the image above. Oddly, both guys, the ESPN guy and the ISIS guy, are in fact acting in a way they think a reporter is supposed to act. Both are following the same role model. I find the detail fascinating, that someone made a small cube with an ISIS logo and some scotch tape that went on the microphone – because apparently that is what you need to be a true journalist on TV. Exactly the way children would play being on TV. The whole thing then brakes apart and becomes very evil, once you realize that the people the ISIS journalist interviews are burned alive afterwards. Cameras still recording. But still, his appearance has to look like the appearance of a journalist on CNN.

Mid January 2016, a suicide bomber hit a TV station in Kabul, Afghanistan, killing seven staff members. A day later a group within the Taliban claimed responsibility by publishing a press release. This press release did look exactly like any other and was meant to be published by the same category of media that was targeted by the blast. So if you want to be a terrorist, you have to blow up media outlets, but on the other side, you also have to act like a PR department would do.

One thing I noticed with propaganda videos coming out of Afghanistan is that they in fact do look somewhat different. Since these groups are now fighting for years in remote mountainous areas and access to media was always seen as something suspicious, the people creating these videos might actually not share our set media role models. At least that would be my theory. Many of these videos just show bearded guys sitting on the ground, talking. The whole interaction with the camera is just not right. And when you do see some training scenes or fighting and you see them trying to act out some of the masculine poses, it looks odd. Maybe this has something to do with the fact that the struggle for attention by western media and western youth is actually won by ISIS over al-Quaeda. ISIS videos have by far more connection to our visual language and are therefore much more potent as propaganda.