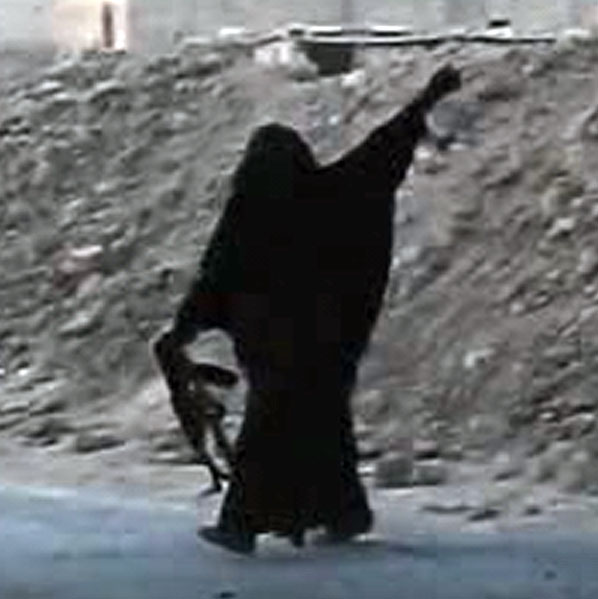 It keeps to leave me baffled to watch the visual world envisioned by different groups of Islamist propagandists and to notice the lack of any female characters. It is truly a world without women. I might have mentioned this before, but this – the non-existence of women – is harder for me to cope with than the brutal depiction of violence against men. I know that there exists every disgusting form of violence against women, but it seems as if this isn’t even worth mentioning. Please spare me with “but they are not allowed to depict women”. Bullshit. They are not allowed to permit any of the violence acts presented in these videos. Not showing women just makes it more evident how fucked up their whole ideology is. Women are considered the lowest of the low.

That makes the rare occasions, when women are actually visible, even more outstanding. From the ISIS-sphere, there is just a handful of videos, I know of, where black clad women are to be seen somewhere in the distant background. The closest to a female character you can get is a small girl of maybe 8 or 9 years old.

But I just stumbled upon a video I had collected last year but overlooked till now. I think it did come out in September of 2017 and it actually shows a female figure fighting. That is the only video of this kind I know. It might have to do with the notion that these battles might be part of a final struggle, that led the propagandist to use this “desperate” material. Of course, there have always been women amongst the fighters or serving as part of the security apparatus, but it has never been shown that openly.

The propaganda is full of heroic male characters, yet this short, 30 something second snippet is the only video I know of that not only talks about fighting women, but “shows” them. But it stops short of giving the figure a face and therefore an identity.