Some time ago – late 2014/early 2015 or so – there appeared a mod pack for the shooter game Arma III that allowed you to play the game as a member of ISIS. In case this needs some explanation, mod packs are software additions to computer games that enable you to change the appearance or the rules of a game beyond the things normally available. Very often these mod packs can be created by anyone technologically savvy enough and are meant to broaden the community appeal of games. Very often this creates almost entirely new games on the framework of the original one.

Here though, in the case of Arma III, a shooter by a Czech company, that would normally focus more on a western perspective, all the sudden became something very different. That is at least the way the media picked up on the story.

I must confess I did not follow the story back then, but from what I find on the Internet today, it seems more likely to me that at the time a group of script kiddies was merely trying to give the game they were playing a very contemporary appeal. To me that makes sense. Late 2014 saw the emergence of the Islamic State as it swept through huge chunks of Syria and Iraq. It still had a lot of sex appeal to it – so much so that even Vice Magazine reported on it in their fancy style. I have even found a quote in a forum that discusses this mod, where someone comments: “The IS units on the other hand are based directly off of footage from VICE News.”.

The true terror was not fully revealed and neither was the true extend of the oncoming struggle. It just must have seemed like something that was out there and that was new. I might be completely wrong, but from the way I have seen ISIS propaganda develop, 2014 seems to be too early for them to produce this kind of mod pack. But it would have been a great story, since this would have perfectly followed the narrative that ISIS is a highly-sophisticated organization, that follows the US Military in its footsteps.

The US military has indeed quite a history of using computer games as a means to recruit young men (mostly men). The game “America’s Army”, that in 2002 started a whole series that continues up to today, would be a classical example. Targeting young men through computer games – they definitely know their audience!

It certainly would make sense for ISIS and Co to utilize similar mechanisms and I am quite sure that you would find plenty of people who ended up fighting in Syria or Iraq, that indeed did play with the ISIS mod pack, but most people who played it would have since then just moved on to other games.

That does not mean that these groups do not utilize digital techniques, beyond video and photographs, when it comes to the creation of their propaganda. For instance, groups close to ISIS have, in the past, released at least two apps that were aimed directly at children. So maybe a full-scale computer game might be too big of a task, but relatively simple apps are certainly within reach.

The thing that brought me to write this brief text isn’t something interactive, but rather a 6 ½ minute long video that is entirely computer generated. I have seen other examples before, where these visuals appear, but so far these made up only parts of the video and were always of a very questionable quality. 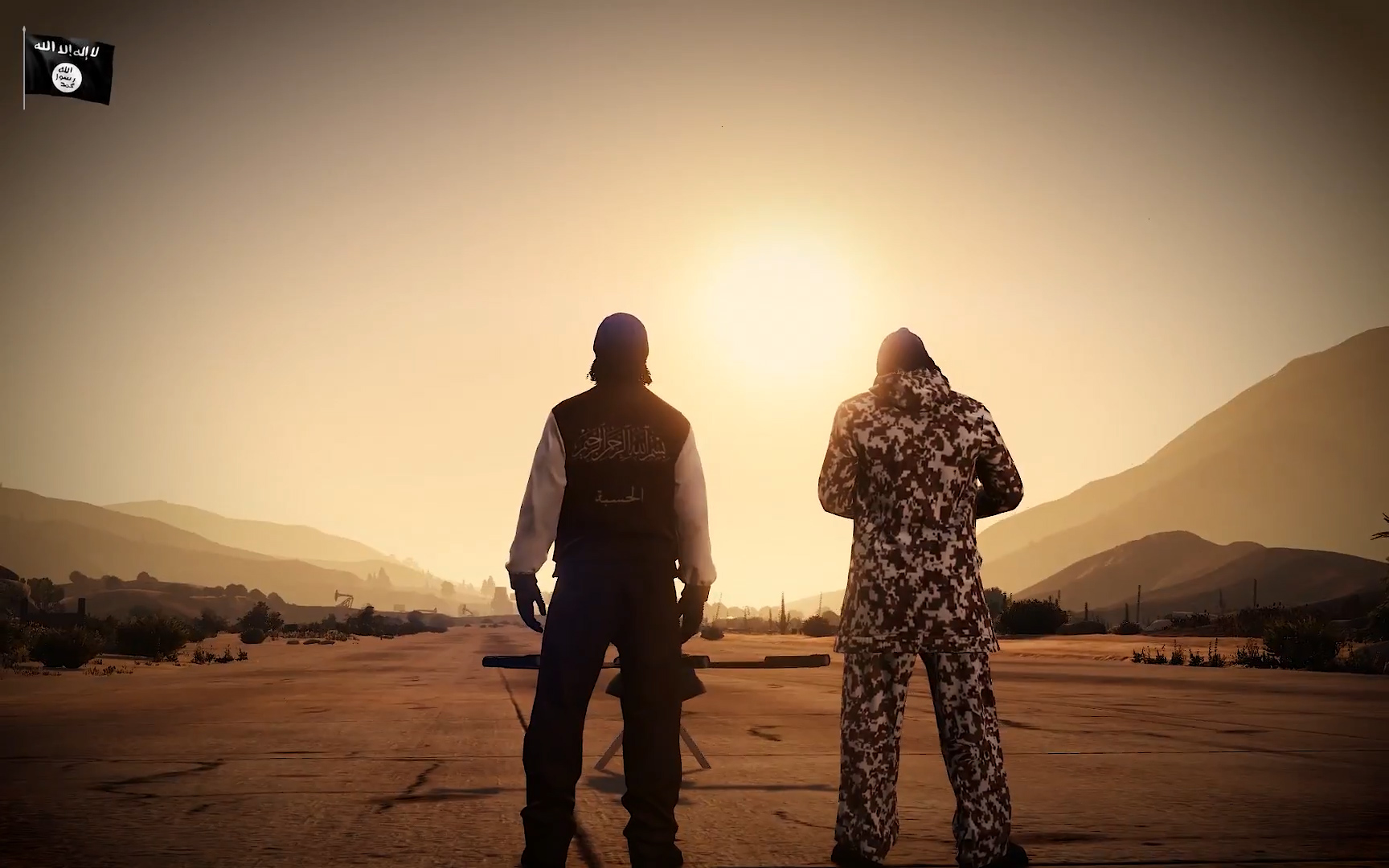 What is fascinating about this new video is, that it tries to resemble closely a common type of propaganda videos, that makes up quite a big part of the propaganda output at the moment. These videos show attacks by little remote controlled drones on soldiers and fighters in Syria and Iraq. The parallels drawn to these videos are striking. The first scene shows two soldiers launching a drone. This drone flies through a dessert landscape and carries out a series of attacks.

It is already striking that the way these attacks – the ones in real life – have spurred an iconic way to depict them. Shot from straight above the first shot shows the bomblet being dropped, then the scene same scene is repeated with the image zoomed in to show the target more clearly and give an idea of the result of the attack. Naturally, since the zoom is done digitally in retrospect, the footage of the second part is quite grainy and shaky – even this is reproduced in the animated video. That I find quite fascinating.

Even though this video looks quite sophisticated – and to some extent this certainly need some skills –, upon closer inspection it becomes clear, that this is very much related to the example of the Arma III mod pack. Similar story, different game. It is quite clear that the basis for the video is the latest edition of the Grand Theft Auto series of games. The landscape shown therefore is not originally meant to represent the Middle East, but rather a fictitious Island that is modeled after California. A clear hint is given when a truck is shown and the license plate reads “San Andreas”. This is the name of the main city in the game. 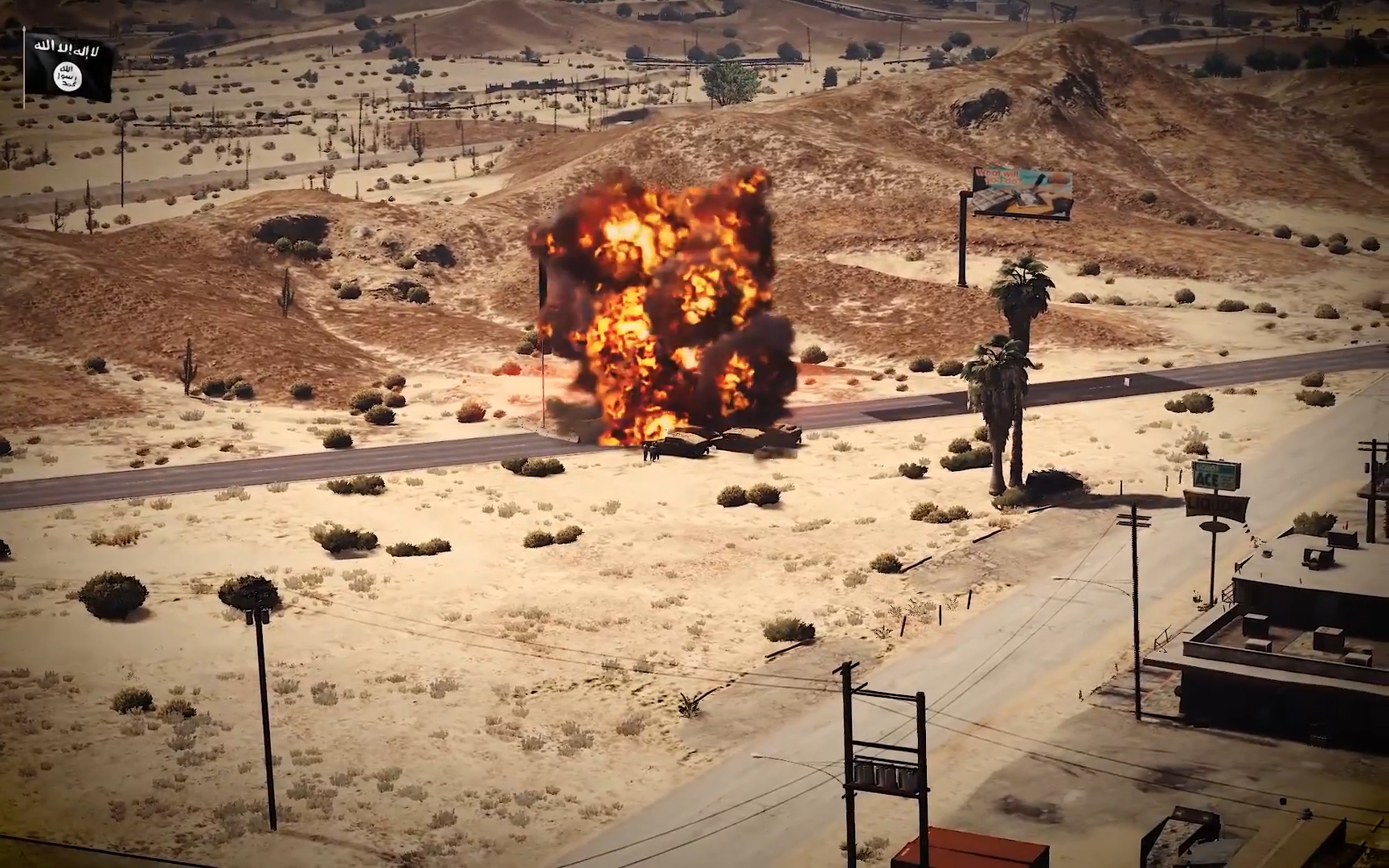 Still, even though much of the work was done using a preexisting game that provides many of the graphics, it would have taken quite a bit of work to create this video. Why bother? Especially, when it tries to copy many of the scenes available as real-life footage? I can only provide some guesswork. One detail worth mentioning is that the Telegram channel that uploaded this video. Was none of the “more official” ISIS channels. And even though it uses the flag ISIS uses as a logo, this flag is on the left side of the image (as far as I have encountered it is always on the right) and the name “Al-Haqq Media” does not ring a bell. I have never heard of this media outlet (please remember that there are in fact different “official” media outlets in the ISIS sphere of influence), nor does a quick Internet search provide much information.

So, the source might be just an enthusiastic individual, or a group of people who have little, if any, real connection to ISIS. But that is so important to me. I find it fascinating that the propaganda that emanates pot from the Middle East has already become iconic in itself. I have mentioned quite a few examples before (the way people are executed, the way suicide attacks are filmed, etc.), yet here, the whole genre of Islamist propaganda, is copied into another medium. The way the storyboard of this short film is developed could serve as the blueprint for a huge chunk of storyboards found in terror propaganda at the moment. True, there are also different types of videos, but the one this resembles (Preparation – Drone Strike – Car Bomb shown – Suicide Attack – Execution of a Prisoner in Orange) is extremely common at the moment.

But then it also reveals the bigotry of people involved in the creation of this kind of propaganda. Of course, whoever has created this video has also played the game. That is just something you do. You are not going to buy or download Grand Theft Auto V as if it were a video editing program with the sole intention to produce a ISIS style propaganda video. You have to play the game first to see its full potential. And the worldview represented by such a video game – love it or hate it – certainly has little to do with the world view of ISIS. And no, I am not going to agree with people who are going to say: “That makes so much sense, ISIS calls for violence and Grand Theft Auto calls for violence, therefore both are related.”. Games like GTA are about violence, they let you envision violence. That is nothing new. The medium is, yes, but there have always been tales of violence and brutality been told within our cultures, very rarely were they meant to incite violence.