I have to go back to the developing drone war that involves homemade drones that were first introduced by ISIS, since this currently develops quickly and that makes me think. It might be two years ago, when the first remote controlled drones – little quad copters with cameras – had been used by groups surrounding ISIS to document suicide attacks involving cars. Mostly the car could be seen speeding through a desert landscape towards apparent enemy positions, before exploding. Sometimes, before the final blast, smaller explosions could be seen as an indication of an attempt to stop the attacker. Sometimes even tiny figures were visible running away from incoming mayhem.

When the first videos of this kind showed up, that was something that changed the visual language of these videos for good. It was quite sexy to be frank and that might be the main reason why these scenes quickly became a new norm for the creation of terrorist propaganda. More and more suicide attacks were presented in exactly the same way – a long shot from the accidental documentation of terror attacks via surveillance cameras or the shaky footage taken with cellphones.

For maybe a year or so, these new visuals were a Syria and Iraq (i.e. mostly ISIS) exclusive. The fact that then, groups in Afghanistan and Pakistan that are linked to Al Qaeda and the Taliban, managed to catch up, by producing their own drown footage reveals that there is a visual arms race at works, when it comes to propaganda. This is not new and whenever there has been an innovation in propaganda, every side involved in the struggle attempted to catch up as quickly as possible. This predates any modern form of visual creation by far. An example would be the use of woodcut prints during the Thirty Years War. But it is still interesting to look at the extremely fast pace of these developments – and it still baffles me that many of the groups involved yell “Death to the West”, while holding Japanese Cameras and uploading the videos to YouTube and Co. War is corrupt and getting involved might corrupt you – that is not new either.

A couple months ago, the next step in the development became visible. To this point, these gimmicky drones had only been used to document attacks – be it by suicide bombers or regular attackers -, or to provide reconnaissance; all things that mostly utilized the capability of these drones to record and send video images. But this changed when makeshift attachments were developed that enabled the operator to attach explosives to the drones that were then dropped on enemy targets. The first video that shows such an attack, at least the first one I have encountered, is of quite a low quality and the missile shaped bomblets seem quite crude. If the meta information of the file I have is correct, this video was created in early September 2016. The video show two attacks and does not include much more. Neither the drone itself is shown, nor anything prior to the attacks themselves.

Even though these were some of the first instances, where the drones themselves became part of the warfare, the claim that they did was made much earlier. While documenting attacks by suicide bombers in their cars, the propaganda videos containing drone footage tried to emulate visual effects one might expect from “real” drone strikes. Even though not necessary when flying a little camera drone the videos very often included different displays and markings. Like the ones one can see in computer flight simulators or in footage from real planes. So, the claim was made that the flying objects were more real than they actually are.

This became more evident, when quite recently – if I am correct, on January 24th 2017 – a video was released that showed extensive use of drones in battle. I discussed this video in particular earlier, so I might repeat myself, but this here is a more in-depth text. This video shows two ISIS fighters launching a remote-controlled plane. One that is made to resemble the newest generation of American stealth drones. Ever since one of these drones was captured by the Iranian Armed Forces, the shape of these drones became something of a prototype of what drones are supposed to look like. The drone used by ISIS is much smaller than the original, but that seems of little importance in terms of its propaganda value. The drone is even shown dropping two small bombs, which are in fact modified rifle grenades.

It is quite interesting that, upon a closer look at the video, it becomes clear that the drone shown in detail, the one that is made to resemble the American stealth drones, is not the one that drops the explosives during combat. It is quite clear that whatever drops those bombs is hovering and therefore must be different from the one shown. These shitty little helicopter style drones, might make good bomb-dropping-devices, their visual appearance is the one of toys. I find it quite funny that there is a group that has a deadly weapon at hand – the quad copters – but for propaganda purposes they need to show something that is far less effective. If they are effective at all.

It turns out though, that “close inspection” is not necessarily what one has to be afraid of, when producing propaganda videos. The fact that murder via drones isn’t a monopoly of America any longer has been noticed by some media outlets. Guess which images are used to illustrate this development? Of course, it is the two guys launching a dysfunctional killing machine. So, the propaganda has been successful in this respect. The article shown here describes how the drone shown is the one that attacks soldiers and bystanders. That is wrong. People are attacked and maybe people are killed. But it is not by the drone shown. Does this make a difference? I would argue that it does. The fact that someone made the effort to make the drone look much fancier than it actually is, shows us that this is an attempt to appear more sophisticated. ISIS wants to be recognized as a global player and not like the random – and incredibly lucky – terror group, which they are. For a fight against a group that utilizes mere toy drones for their terrible deeds the United States would not need to raise their military budget by 54 Billion Dollar, but to fight a group that is capable of using these “highly advanced” drones? Well, take our money – right?!?

So, it seems as if one has to be careful with propaganda. I would argue that this is true for everyone involved.

This form of drone warfare seems to be extremely tempting and as it seems, ever side pretty much has started to implement these techniques. You’ll find a huge number of images and videos that refer to the use of quad copters to drop small amounts of explosive by the Iraqi Armed Forces for instance. Quite often it seems as if they just use the drones sized from ISIS forces, but things are already changing and the development is not going to stop here. Not matter how things develop from this point on, some changes are already quite apparent to me. This is the point where I believe that propaganda might come back to hunt the propagandist. 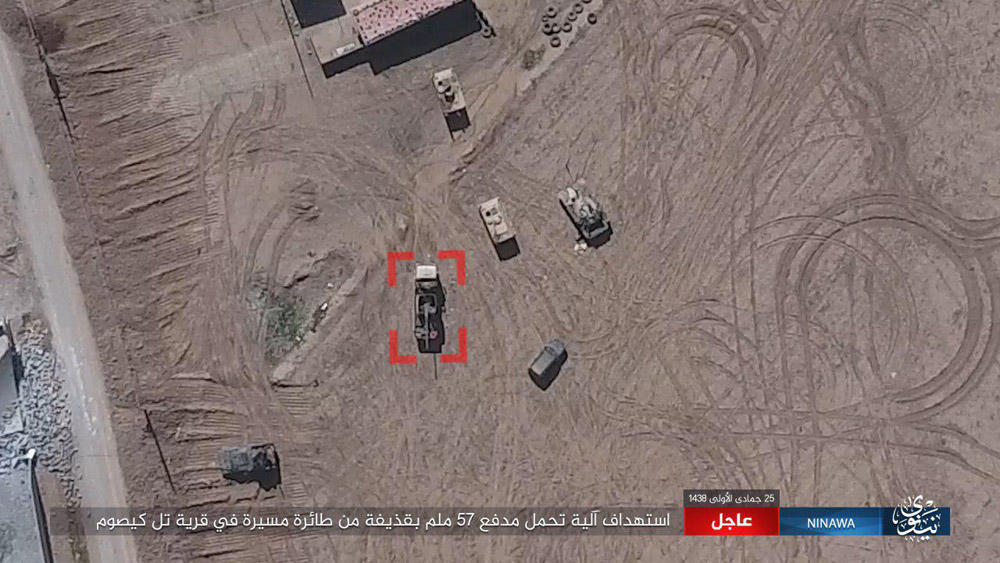 When ISIS used the first drones to produce their videos – the ones that did not kill but merely capture -, they quickly felt tempted to include the appearance of US drone strikes by adding some graphics to the videos that made them appear as if “real” drones had been involved in the attacks. By the way this was also done in the very first drone video from Afghanistan.

As with the use of orange jump suits when executing prisoners and hostages, this was done as a reference to American atrocities. We consumers of videos online are taught to expect certain looks in certain cases. We have a vague idea of what a drone strike might look like. It certainly includes some infographics. Like the ones, a pilot would see. Or the ones, that would be added afterwards to make videos released by the US Armed forces easier to decipher. In a way, this is funny, since most of the videos one can find searching the Web that are labeled as “drone strike footage” haven’t been taken by the cameras mounted on drones. Most of the material is from attacks by regular planes or more often attack helicopters. The real visual language used by real drones remains invisible and classified. Maybe this would reveal too much of the capabilities of these weapon systems.

That doesn’t really matter. We have a somewhat fixed idea of what drone strikes have to look like and ISIS and Co try to emulate it. But what happens if you overdo it? I mean the fact that the “real” drone war, the one over Afghanistan, Pakistan, Yemen, Libya, Somalia – well, pretty much all over the globe, where you find people with brown skin and the wrong faith – remains invisible, while ISIS creates an visual overabundance of examples of their “do-as-if-done-war”, might come back to harm the propagandists. Already, in the West, the outrage over the American drone warfare is quite limited, but now the term “drone” and “drone warfare” becomes more and more associated with the things the other side does. Plus, the more professional the images look that are created by the new players, the easier it becomes to use them in reports by the media in the west. All the CIA and the American Armed Forces have to do is to further limit their visual output and ISIS ends up flooding all channels with their propaganda.

What had been intended as a carefully produced reference to Western atrocities is going to be a reference to one’s own atrocities. This has already happened with the use of orange jump suits, which was originally intended as a justification towards the terrible things that were done by foreigners to Muslims in places like Guantanamo Bay, but the images that were created were far catchier than the source material. Imagine a guy kneeling in an orange jump suit. What does this remind you of? An execution by ISIS or a prisoner in an American prison camp? Right now it still might be both, but things seem to shift quickly.

And now think about the images of a drone strike. There is already very little to visualize on the American side and ISIS and Co work hard to define these visuals as well. Just wait for the first drone strike somewhere in the West, where the attacker manages to capture the video feed and propagate it online. This then is certainly going to be one of the defining image when you are thinking about the term drone attack.