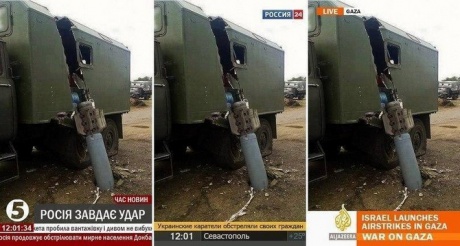 Unfortunately the image shown here is of relatively bad quality. It appears to show a rocket that has hit a truck. The rocket failed to explode, leaving a huge gash in the side of the vehicle. No matter how amazing the image might look, the truly astonishing part to me is its usage by different media outlets to document different wars. Depending on your source for news, the picture either shows a truck in the Ukraine, hit by a Russian rocket, a truck in Russia, hit by a Ukrainian rocket or a vehicle in Israel, hit by a Palestinian rocket.

Sure, we can all agree that, at most, only one of these stories could be possible true. But things are more interesting than that, if we just ignore this little detail.

In a way this problem isn’t new. In the middle ages, people in Europe went crazy about Christian relics. People died for them, wars were fought and pilgrims crossed the entire continent just to have a glimpse at the bones of a saint or two. But of course this also presented the perfect business opportunity for fraudsters. Dig up some random bones, put them in a nice reliquary, add the name of a saint in high demand and if you find a willing buyer, you can end up with a huge profit. The problem with this was, that there were more fraudsters than profitable saints and that led to the point, where the same body part of one saint was worshiped in different places. So apparently some saints seemed to have had more than one head, more than one right hand or more bones than a body would normally fit. This inflation was not limited to body parts though. Calvin suggested “if we were to collect all these pieces of the True Cross exhibited in various parts, they would form a whole ship’s cargo.”

But of course this created a problem. People believed that by touching the relics of a saint, or even by looking at them, they could somehow use the power resting on the saint to their own advantage. Or maybe through the saint they could get a more direct access to God. But what if the bones are not the real ones? Not only would this not work as a direct path to the saintly, but worshiping the wrong bones might even be sacrilegious, since you might even, unknowingly, worship the bones of a sinner. Intellectuals were puzzled by this and came up with a – if find – beautiful solution. They argued that God would not allow you to worship the wrong bones, while you were truly believing that these were the bones of the saint. God would take care of that.

To me, that does not sound quite as absurd as one might expect and I find it easy to draw parallels to our world. If we, for instance, take counterfeit Nike sneakers. Which part of “Nike” are they lacking? Maybe they were produced in the same factory, or at least a similar factory with similar machines. They look the same and so does the logo. But still, the Nike company would declare them to be fundamentally different. But what about the person who buys them and believes in their authenticity? To him or her, they are the real thing – maybe until someone raises their doubt. In a way, they can be real and fake at the same time. And the same is true for the “real” Nike shoes.

That might explain, why companies like this shoe maker are so afraid of counterfeits. The part that makes an object “real” in a brand sense, is always artificial.

And maybe – back to the image mentioned at the beginning – we are moving towards a point where our perception of reality in general becomes closer to this problem. What does it mean, if an images is supposed to show a random event in the Ukraine anyway? How could we understand the “reality” behind it? When was it taken? By whom? What was the situation like? What was it like if you looked to the right of left? Who else did see it? And so on, and so on. There is so much that is not covered by the image that might be considered part of the real setting of it, that the pixels present on our computer screen become almost irrelevant.

So maybe, like the relic, and like the company logo, images become a mere illustration that illustrates our expectation of an abstract thing that has no physical imprint in the object itself. In that respect, all three images show the reality they help create and are therefore similarly true.